If you ask the males in our household which they would rather have for their dessert, cake or pie, they would probably say “pie” about 95% of the time. So when I brought the subject of a pie challenge up to Doug his eyes lit up like a Christmas tree in a Chevy Chase movie.

I plan to feature a different pie every week for the next 52 weeks. Pretty big deal huh? If you have a favorite pie recipe that you would like me to try out in the next 52 weeks please feel free to e-mail me at marymargaretripley@yahoo.com with your recipe and story (I love a good story behind a recipe) and I will try it out and feature it on the blog if all goes well. With that, here is the How-to and recipe for Week #1 Mississippi Mocha Mud Pie. Enjoy! 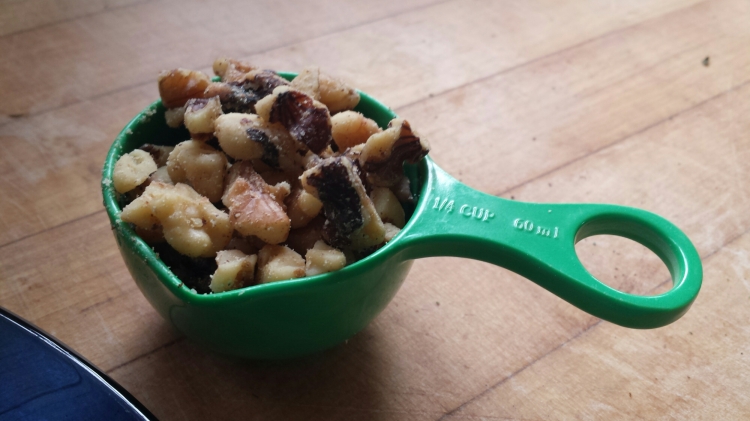 Over all this recipe trying it for the first time was fantastic! There are a couple of things I think I would tweak though. One being, add more filling. I would have liked it a little fuller. Either that or use an 8″ pie pan instead of a 9″ pie pan. Two, I used walnuts instead of pecans and I wished I had used the pecans. Three, I really didn’t taste a lot of the coffee so next time I will use a stronger brew. Four, I will chill it overnight. It was even better the next day .

This was one of the easiest cream pies I have ever made and I hope to use these same methods with other cream pies. I have never put the egg yolks directly into the mixture while it was cold. Most recipes and methods call for putting half of the hot mixture into the egg yolks separately then dumping the whole egg mixture back into the original mixture. This recipe eliminated that extra step and it worked beautifully!

As far as the taste and how it went over with the guys? Scott gave it two thumbs up and Doug…well he likes banana cream pies better. Ha! Next time Doug!

I will definitely make this pie again. Here is the link to the original recipe for easy printing. Posted by David on his blog, Spiced-One Dash at a Time. Thanks for a great recipe David! http://spicedblog.com/mocha-mississippi-mud-pie.html

Until next week! -MM

I am a professional Bakery Manager at a privately owned grocery store. I also owned my own bakery for over four years. I have been baking for 15+ years professionally. I also teach canning and preserving classes and have been gardening since I was 5 years old. I live in Western, NY with my husband, teenage son, Bernie the Cat and Muffins the Hamster. View more posts

This site uses Akismet to reduce spam. Learn how your comment data is processed.

One Hundred Dollars a Month

I am your typical housewife living in high maintenance suburbia. I have a handsome husband, 2 kids and a flock of pet chickens. I try and feed my family with $100 a month. With the help of coupons, gardening and bartering I am able to squeeze the most out of our grocery budget and still manage to have a little fun along the way.

Sharing my journey in and out of the garden

The Snail of Happiness

small steps to a kinder world

Cocktails In The Library

Leading a happy and sustainable lifestyle

just living my best life in the midwest.

Sewing Beside the Sea

All things made with my needle and thread

Sharing my adventures in sewing and needlearts

The Journey to a Debt-Free Life

From the Mind of a Gamer

my little corner in blogland

She, ever the crafter, kept on crafting

Celebrating the "funner" things in life...